A sturdy ranged hero with a blunderbuss that can place protective barriers on units and tap into an inner primal rage.

Magical
Encase one of your units, rendering it unable to act but making it invulnerable and restoring 20 health per second for 4 seconds.

Upon expiration, the unit will receive 200 bonus Physical Resist for 1 second.

Magical
Grath becomes enraged for 20 seconds. While enraged, Grath has increased size and 100 bonus Physical Resist and Magical Resist. For the duration, his attacks deal 20 damage to units in an area around the target, and slows their movement speed by 70% for 0.8 seconds. The primary target is slowed for 2.5 seconds instead.

Grath is an advisor to Gorok and often referred to as the "Prime Inventor." Despite coming to age in a part of Arctora which was devoid of anything but the crudest of contraptions, Grath has always been fascinated by technology. Grath believes that strength is the key to resolution, that Atlas is a battleground between nature and technology, and that nature will win. But to defeat technology, one must understand it. After years of secretly studying advanced weaponry, Grath used his knowledge to attack a research lab run by scientists in the Order of Hamaliell. After freeing the turtles, apes, and other wildlife imprisoned within, Grath built crude weapons and armor to ensure that they could fight back. 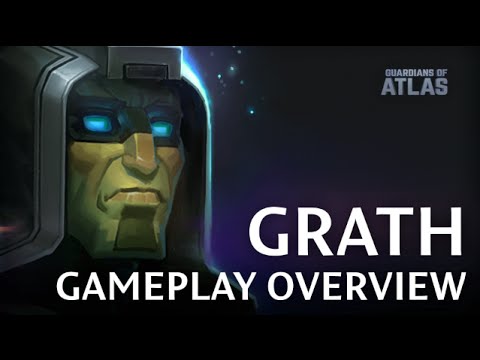